Mushrooms – sprouting from baskets, crumbling in packets. Pungent – piercing the nose of all who happen by Sara Weller’s stand. Passersby then lured by a raft of beige, white, and  greys – speckled bulbs, satiny and akin to the orb of a fortune teller. And, indeed, mushrooms are steeped in lore. 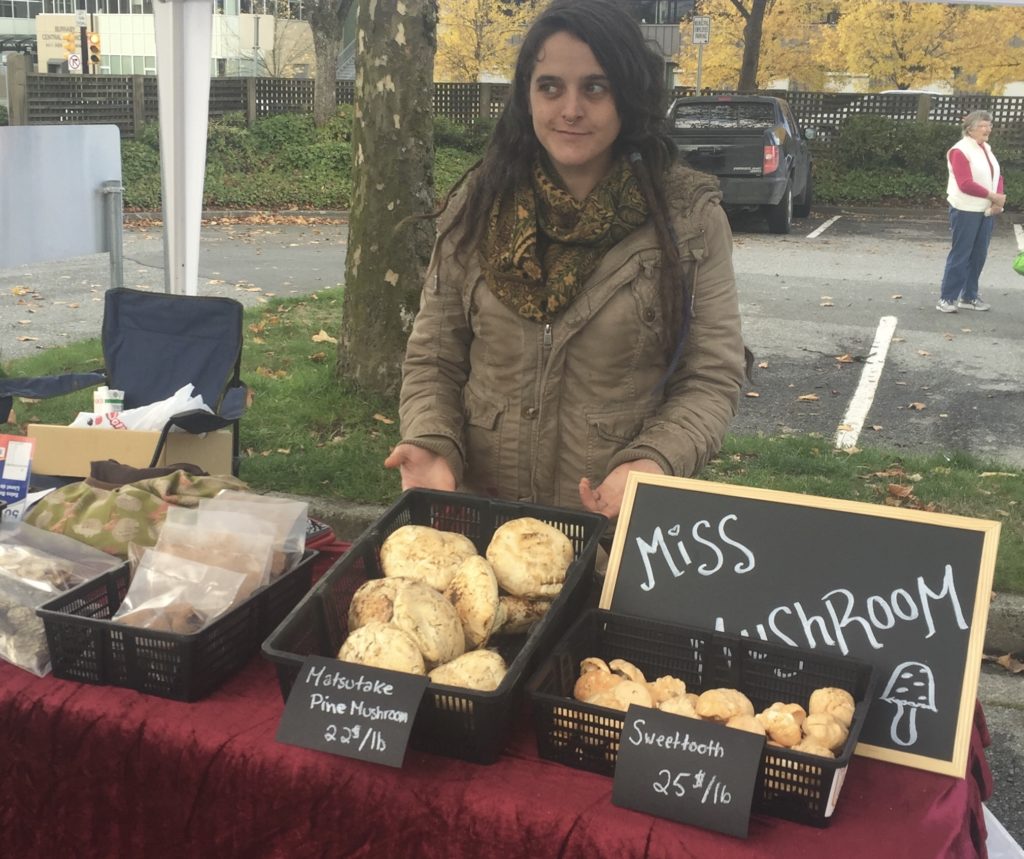 A recondite fungus that dwell beneath the earth like fossils, or buried treasure. Burgeoning, unseen; in a secret world. Canadians, in particular, are taken by the fact that such an uncanny, and potentially poisonous,  specimen festers beneath the ground they trod upon. Many stagger at the sheer size of the mushrooms. Though, according to Sara, some can conflate to the size of a human’s head. She relays all this information to curious customers, describing the mushrooms’s origin as if legends – their characteristics as if the intricacies of precious gems.

Each species are wild; united by a shared reliance upon the forest ecosystem. A reliance that also cultivates an infinite diversity. The west coast, for example, yields large, damp mushrooms reflecting the rain-laden environment. 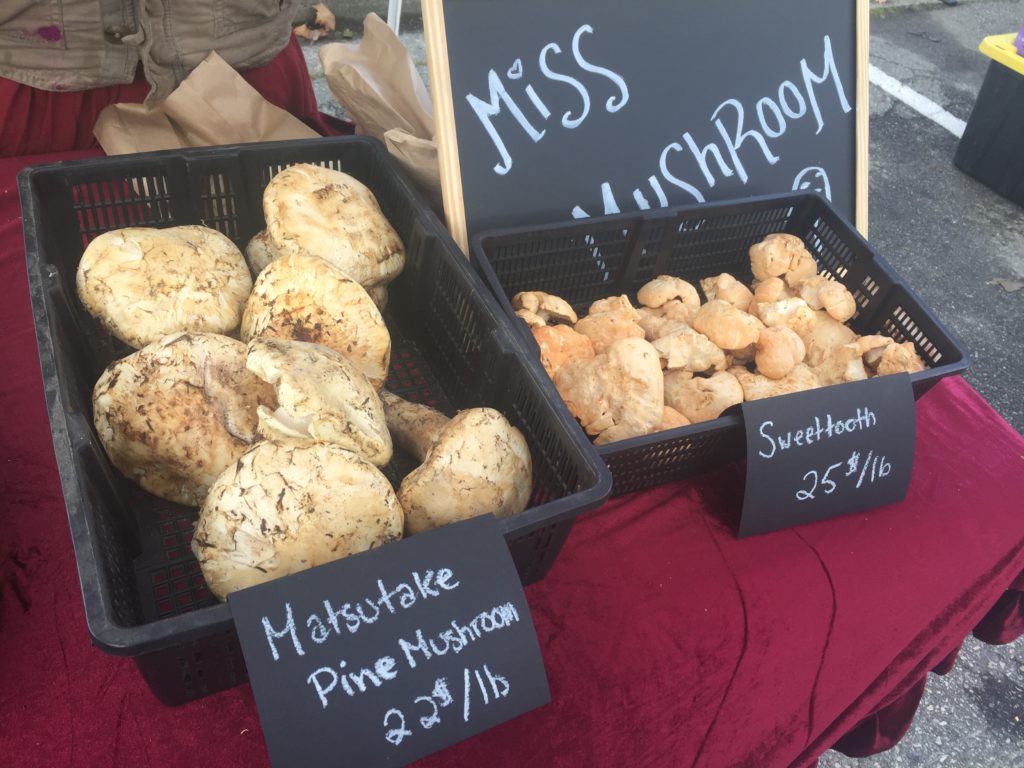 Saskatchewan, conversely, cultivates a small, dry variety that endures for extended periods of time. A contrast to the fast-expiring Chanterelles – a fixture at Sara’s stand due more to their familiarity than merits. The most alluring variety is, thus,  the pine mushroom; a tiny nugget charged with flavour. Their rarity and prolonged expiration date forge the tradition of gift giving, particularly in Japanese culture.

Regarded as akin to jewels, pine mushrooms aptly grow deep within the soil, announcing their presence by a mere bump that evades most. “You just have to know,” states Sara, alluding to a sort of sixth sense harboured by foragers. A sense she herself has cultivated since her youthful affinity for pine mushrooms. She describes the act of foraging n image of foragers, on their hands and knees – probing the woods for buried treasure. 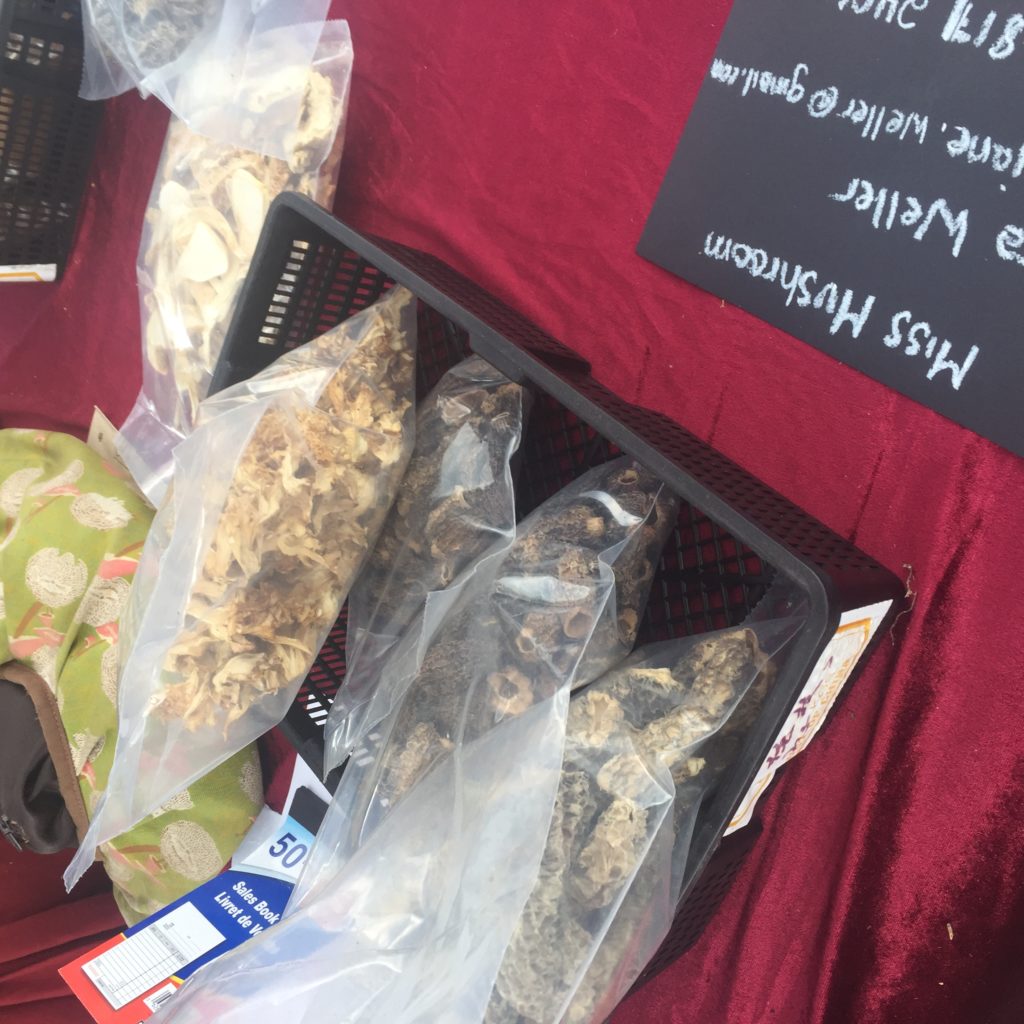 Sara, however, does not sell the mushrooms she collects.. The two occupations  of foraging and selling are distinct; the former requiring a nomadic lifestyle. And thus,  Sara, not wishing to uproot herself from her home, commenced “Miss Mushroom;” connecting with foragers that span from Coast to Coast.  Season by season, she amasses troves of mushrooms that are purchased, picked up, and sold within a couple days. Her products are invariably fresh. Handed off to other business, or weekend markets.  Her profession is not limited to handling transactions, however. To sell mushrooms is to embrace its culture- and be able to impart this knowledge to others, infused with passion.

As a vendor, she does not necessarily enjoy the taste of mushrooms, but rather, the process of transplanting them to people’s kitchens. In her mind, mushrooms are ubiquitous, burgeoning in cities, woods, the sea, and other environments as diverse as their species, or the customers that purchase them. Mushrooms sustain the earth; an invisible thread that connects everything together.